It all started with a very bad day, backed up traffic, and a bar (as most good stories do). Those of you who frequent my Facebook page may recall seeing this post: 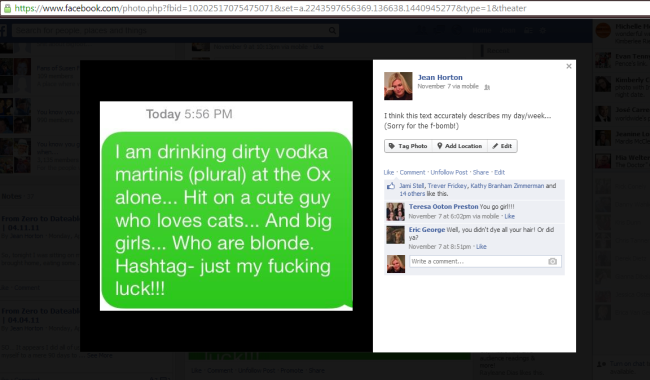 Yep, that’s the night the groundwork was laid for CRUSH to have competition. I work on the 9th floor of a nine-story building and my window has a rather glamorous view of the traffic on the highway headed toward my house. I know exactly what I’m getting into when I leave the office. Well, after a less-than stellar day all I wanted to do was go home, put on my lounging attire, pour a glass of wine (or rip out the bladder from a boxed wine and stab a straw in it Capri Sun style… whatevs) and RELAX. Alas, traffic was seriously backed up and I knew that if I went downstairs to the bar (yes, there’s a bar in my office building, freakin’ awesome) and had a drink then traffic would die down and I could avoid the frustration of sitting in it and still get home at about the same time (hashtag the justifications we tell ourselves)… So I did.

I bellied up to the bar to gossip with the bartender (my girl Shonda) and I ordered a deliciously dirty martini — up. That’s about when I glanced down and noticed him. One of those good ‘ol boys with the sweet eyes and big grin and the kind of arms you just want to curl up into… Especially after a terrible, horrible, no good, very bad day.

She then proceeded to make typical bartender small-talk — You in for the livestock show? No? Oh, okay. Meeting people? Yes. Alright. Yeah… closed book, not very talky. Fail.

Enter 1/2 martini-in Awkward Jean. The guy had just returned from a trip to the restroom, having left his mostly full beer on the bar, and I say, loudly from the opposite end of the bar,

“Because you left your beer sitting here in front of strangers. I could have ruffied you you know?”

So I scooch my way down toward his end of the bar to make small talk — he was meeting some co-workers for a happy hour if any of them ever showed up. No, they don’t typically come here but he’s been before and liked it, soo… here he was… About this time his co-worker (a blonde, bigger girl) walks in and it’s pretty clear we are done talking. UGH. I make my way back down the bar, but occasionally glance down, hoping to maybe make eye contact or get invited into the conversation… No such luck. I order another martini, I can’t leave. I’ve got to talk to this guy more. I try to see if he has a ring — negative. I see she does — sweet, just a co-worker, not a romantic… Wait, they’re leaving… together… Sad. “Water please Shonda.”

But wait! He came back. And we got to talking and we ended up staying for quite a while just joking around, getting to know each other… I tell him I’m normally blonde… about 17 times just in case he was interested in the other girl and liked blondes. I mean, come on… he needs to know. Eventually it was time to go, he asked for my number, walked me to my car, kissed me… Ahhh… suddenly I couldn’t even remember why it’d been such a terrible, horrible, no good, very bad day. It seemed like a pretty good one to me. He wanted me to text him when I got home, to make sure I made it okay. How sweet. And yet… sour.

What about CRUSH? What was I doing? I’m an idiot. But… this guy was soo… UGH. What about CRUSH? I called CRUSH when I got home, he was sweet and I was remembering why I like him so much… but then the guy from the bar was texting too…

Bar guy and I texted a little that night. And a lot the next day. He told me he Facebook stalked me. I liked that. And, I obviously asked if he liked the blonde hair better than the brown. The answer… 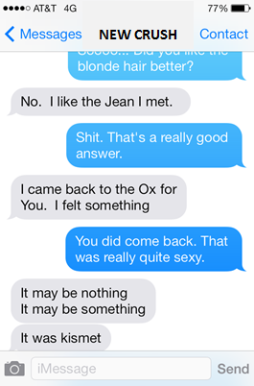 And that’s the moment when the guy from the bar became NEW CRUSH. I now have ORIGINAL CRUSH (OC) and NEW CRUSH (NC)… What’s a girl to do?

Well, obviously I had to Facebook/LinkedIn/Google-stalk NC. I already know OC, but this NC is too good to be true… time to get my Magnum PI on! Well, actually… my friends did it for me, but… Well, yeah, that’s actually EXACTLY what Magnum PI would do — I guess I had my very own Rick, TC and Higgins on the case! And, even without his last name and the few tidbits I knew about him they were successful. Well, I guess. The success was bittersweet, because we found his Facebook and on it… We found this:

I KNEW it was too good to be true. And here I was rethinking the whole ORIGINAL CRUSH and oh my gosh… Homewrecker! And he seemed so nice and… Wait. How come there are zero pictures on his FB indicating he’s married… or posts for that matter… Maybe, well, maybe it’s complicated? What’s a girl to do?? Crazy cyber-stalk mode. THAT’S what a girl’s to do.

So we did. My crew and I dug up ALL sorts of things… most of which ended up being the wrong person and some of which were unclear at best… Finally I had to go to Defcon 5 of Detective Mode — I had to just ask him.

Yes, he’s married but separated, divorce is imminent (still not really sure what that means) and he understands if I don’t want to talk anymore. So… he was honest. And thoughtful. And understanding. He tells me I’m beautiful and sexy and fun. He says he’s quite taken with me and can’t stop thinking about me. He says he wants to see me again. And he texts all day, every day since we met. And he knew the word kismet… and used it. Damn.

So, that’s the story of how Awkward Jean ended up with two CRUSHES, both of whom appear to be equally unavailable. Seems to be my lot in life. I guess this is one of those stories that is destined TO BE CONTINUED… I think NC reads the blog, I know OC doesn’t. I don’t know if I’m supposed to pursue either one or neither or tell them anything about the other or what, but then… I’m Awkward Jean. If I knew how best to handle these situations, I suppose there wouldn’t be a blog, now would there? Currently accepting advice. And hoping if either of them are reading… I didn’t just ruin a whole lot of maybe.